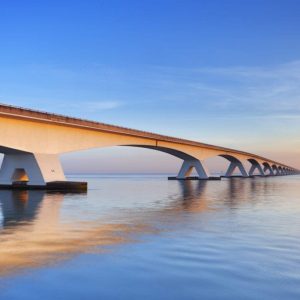 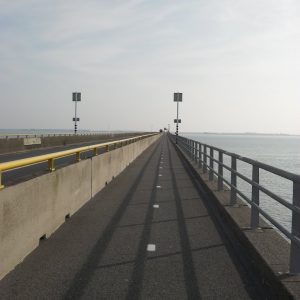 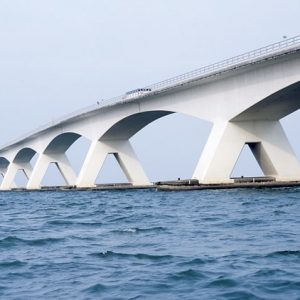 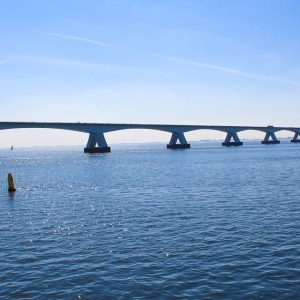 The Provincial Council of Zeeland decided in 1962 to build the Zeeland Bridge. The aim was to make a rapid connection between Schouwen-Duiveland and Midden-Zeeland, and more specifically with the seaport industrial area Vlissingen- Oost, which was then being developed. The Delta Works were still in full swing at the time, but the province of Zeeland did not want to wait for the road across the dam in the Oosterschelde. At that time there was no question of the water-permeable storm surge barrier. The dam was finally completed in 1987 and the Zeeland Bridge had been in use for over twenty years. From the opening of the Zeeland Bridge until December 31, 1992, car traffic had to pay a toll to pass the bridge. This toll was necessary to complete the operation of the bridge, all the more because the state did not contribute to the financing. Initially, tolls were also levied on pedestrians, cyclists, moped riders and bus passengers, but this was soon abolished. Many users were offered a reduced rate. In 2000 the road underwent a thorough reconstruction for road safety. The toll collectors warned motorists with caravans and truck drivers on the Zeeland Bridge at wind force 9 to 12. Nowadays there are warning signs on both sides of the Zeeland Bridge. The Zeeland Bridge is more than five kilometers long, the longest bridge in Europe at the time of its opening by Queen Juliana on 15 December 1965. That status has now become obsolete, but on December 15, 2015, the Zeeland Bridge was designated a national monument by the Cultural Heritage Agency of the Netherlands. The Zeeland Bridge is owned and managed by the Province of Zeeland.

Incredibly beautiful drone recording of the Zeeland bridge made by XL Creations.