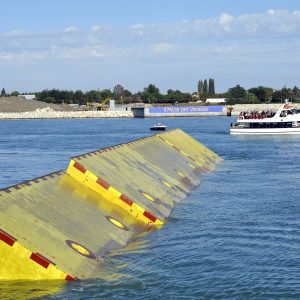 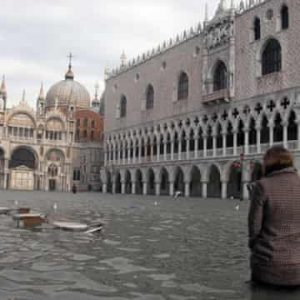 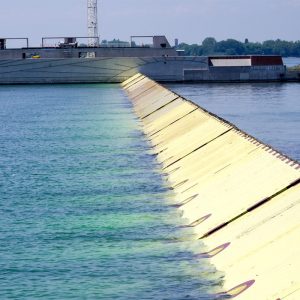 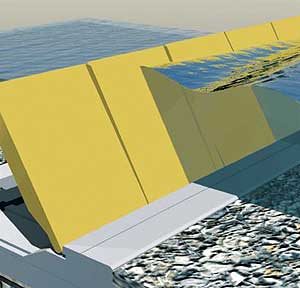 Venice has suffered from flooding since the city’s founding, but in the 20th century, high water levels, ‘acqua alta’ in Italian, followed each other faster and faster. Not only is the sea level rising, the city is also sinking into the uneven ground. Currently, Venice is up to 25 cm lower than in 1897, when the current official reference level was established. The local relative sea level rise was about two meters between Roman times and the 20th century, averaging 13 cm per century. The city is subsiding due to a combination of natural causes and human actions. The groundwater pumping, large-scale landfill and the construction of the industrial area of Marghera and the up to 18 meters deep channels for large oil tankers and cruise ships have disrupted the biological balance between deposition and erosion in the lagoon. Water flows from the interior into the lagoon in 36 places, chased by the Bora wind in winter. The most serious flood in the city’s history, with water reaching 1.9 meters above mean level on November 4, 1966, was due to a combination of abundant rainfall in the hinterland and an unfavorable spike in tidal resonance of the Adriatic Sea, enhanced by an exceptional sirocco wind. The MOSE Project is part of an initiative of the national government to strengthen the resilience of the coastal regions with environmental measures. Around the lagoon, the sandy beaches, jetties and quay walls in the wider area are also being reinforced over a length of more than 60 kilometers.

The weir consists of 78 hinged steel caissons, which lie in a concrete container on the seabed at rest and can be pumped out and raised in half an hour at high tide. The caissons then form an angle of 60 ° with the seabed, blocking the supply of water from the sea. Each segment is 20 meters wide, 5 meters thick and, depending on the depth of the seabed, up to 30 meters long, with a wall thickness of 120 mm. Once the danger of flooding has passed, the parts can be lowered again in 15 minutes by filling them with water. The barrier is designed to withstand up to 60 cm sea level rise in the coming century and is functional up to a water height of 3 meters above normal. In a situation up to 110 cm above normal, other measures are sufficient, such as upgrading quays. The maximum height difference between the water on both sides of the barrier is 2 meters. The three entrances can also be closed individually or partially by raising only a few segments. The supply of seawater in the lagoon can be slowed by reducing the width of an opening. The 380 meters wide entrance at Chioggia is closed by 18 segments, the one at Malamocco is 400 meters wide and will have 19. The entrance at the Lido is more than 800 meters wide and features an artificial island in the middle, with space for 20 segments on one side and 21 on the other. Each of the three openings will be equipped with breakwaters, made up of acropods and locks to keep the passage open for shipping.

How does the flood barrier at Venice work?