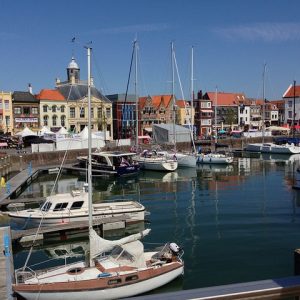 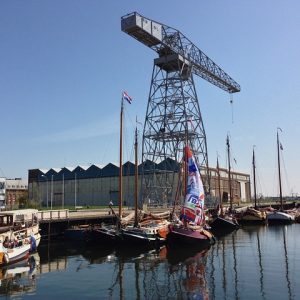 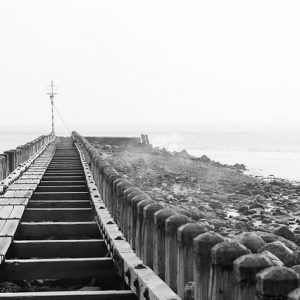 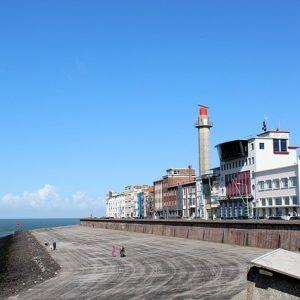 The first mention of Vlissingen, then no more than a small hamlet, dates from 620. The name Vlissingen probably comes from a bottle, which plays a role in all kinds of theories about the name and can still be seen in the coat of arms of the city. The city was granted city rights in 1315. The townscape of Vlissingen was determined by shipbuilding for centuries. One of the shipyards of the Admiralty of Zeeland was located in Vlissingen and in 1814 the Royal Navy established the Marine Etablissement Vlissingen here, a shipyard for the new construction, repair and equipment of naval ships. In 1868 the shipyard was closed and in 1875 the yard was taken into use by the Koninklijke Maatschappij De Schelde. In 1872 a modest bathing pavilion was erected at the bottom of the dunes, the ‘Badhuis Vlissingen’. The Vlissingen entrepreneurs and administrators worked hard to make the city suitable for emerging tourism. A favorable outcome was the start of the steamboat service to England, the construction of a tram connection with Middelburg and the arrival of the railway. Day trippers also came to Vlissingen for the first time with the new railway from West Brabant.

The Stoomvaart Maatschappij Zeeland provided some English overnight tourists, but tourism did not really get off the ground. That only happened when the Grand Hotel des Bains was built on top of the dunes in 1886. Concerts and other activities took place in the halls of this hotel. In the early days, the hotel was closed in the winter, which meant that the operation could not be completed in the long run. That changed in 1923 when the hotel came into the hands of the Zeeland Steamship Company at a public auction. After extensive renovation, the name was changed to Grand Hotel Britannia.

In 1892 the Association for the Promotion of Immigration Traffic in Vlissingen was founded. This association produced and distributed brochures, placed advertisements in national newspapers and magazines and advised the municipality on the layout of the beach and boulevard. The development of the seaside resort also received a lot of attention from the municipal authorities after 1900. From 1906 there was a bandstand and in 1907 the Lion Staircase was built to make access to the beach even easier. There were kiosks, walking paths, benches and electric arc lamps. The city wall was extended beyond the hotel as a boulevard and thus became an almost two kilometer long pedestrian promenade. From that time on, tourism got off to a good start. On the beach one could rent beach carriages that were ridden by horse to the waterfront. There were wicker beach chairs on the beach and the bandstand provided the necessary entertainment. The Stoomvaart Maatschappij Zeeland regularly brought English tourists who could enjoy a beach holiday in the hotel.

In the 1930s, to stimulate the economy of the city, based on the three pillars of tourism, port and industry, the ports of the city were enlarged and Vlissingen was promoted as a seaside resort. A bathing beach and a walking pier were constructed. A pavilion with a dance floor and stage was built at the head of this pier. In 1943 the pier was demolished by the German occupiers to prevent an Allied landing. The Grand Hotel Britannia was converted into the German headquarters, with heavy bunkers on both sides. During the liberation of Vlissingen, the building was destroyed by the Allied troops. After the war, a reconstruction followed that formed the basis for today’s seaside resort. Tourism increased and in the 1990s the center and the boulevards of Vlissingen were completely renovated. There were tourist attractions, many new homes, an indoor shopping center and covered shopping streets. Since then Vlissingen has been a modern city where it is nowadays good to live, work and recreation.