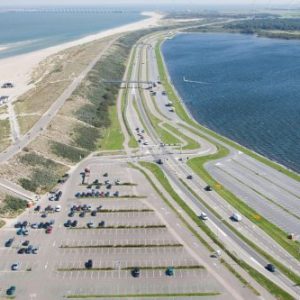 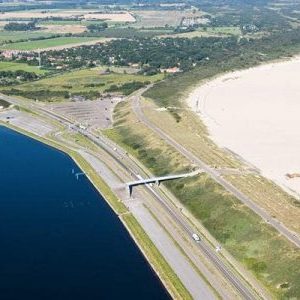 The Veersedam or Veersegatdam was built in 1961 at the mouth of the Veerse Gat to protect parts of Walcheren, Noord-Beveland and Zuid-Beveland against a possible new disaster. The construction of the dam connecting Walcheren with Noord-Beveland was not easy. The Veerse Gat was larger than the Zandkreek and a strong current arose at every tide. Both at low tide and at high tide, more than 70 million m3 of water flowed through the estuary. If the hole were to be closed with the same kind of caissons as those used at the Zandkreek Dam , the current would eventually become too strong (the smaller the hole to be closed, the greater the current, because the same amount of water is forced through a smaller opening) .

The solution was the so-called ‘pass caissons’, which, in contrast to the unit caissons of the Zandkreekdam , were open. The section where the dam was to be built was first raised by spraying sand and then a ‘threshold’ of stones was placed on which the caissons could stand firmly. Then the caissons were placed one by one in the 320 meter wide hole. At the time of installation, the caissons were still open, so that the water could flow unimpeded and only when the flow was minimal, the gates in the caissons were lowered. Since the Zandkreek was already closed, a new lake was created, the Veerse Meer. A lot would change on this lake, especially as the salty water slowly became brackish.