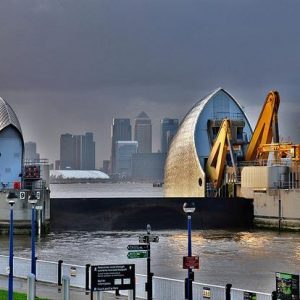 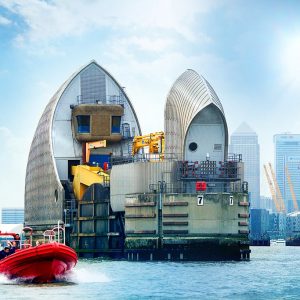 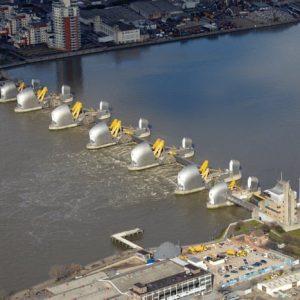 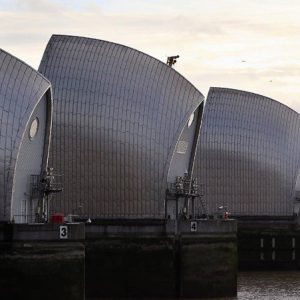 The Thames barrier is a barrier on the River Thames in Woolwich, a district in the east of London. The construction of the barrier lasted from 1974 to 1984. The operation of the Thames barrier is comparable to that of the Oosterscheldekering in the Netherlands. To protect the city against high tide from the North Seathe barrier was built downstream from London. Immediately after the high tide, the barrier can be opened again to prevent too much water from accumulating on the land side of the barrier. The Thames barrier was built where the river is 525 meters wide and divides the river into four spans of 61 meters, two of 31 meters and four non-navigable on the banks. The pillars are connected by round-section doors that are normally at the bottom of the river. They are hydraulically powered from the piers placed in the river and can be turned up further to control the amount of water flowing past. The doors can swing up 180 degrees and come completely out of the water to facilitate maintenance work. The steel doors, 40 mm thick in some places, are hollow and fill with water as soon as they are in the river and empty as soon as they rise above the surface of the water. The four central doors are 61 meters long, 10.5 meters high and weigh 3,500 tons. The outer two doors are 31.5 meters long. There are also two smaller, non-navigable, doors on either side of the six large doors. Normally all doors are open to allow shipping through, but if necessary, all doors can be closed to prevent any water flowing upstream from theNorth Sea comes, to stop. Before 1990 the barrier closed on average once or twice a year. Since 1990 this has increased to four times a year. In 2003 the barrier was closed during fourteen consecutive tides.

The closing of the Thames Barrier (timelaps)