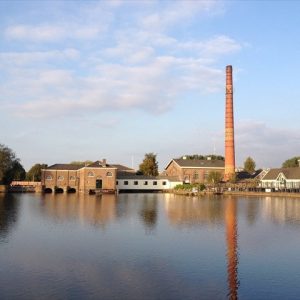 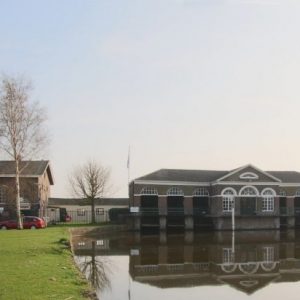 The disappearance of the Haarlemmermeer was a major problem for the Rijnland Water Board: the storage basin – where surplus water is temporarily stored – was reduced by 80%. The water now had to be discharged to sea as quickly as possible and the only way to do this was with steam power. Three chimney steam stations were built at the expense of the state: Spaarndam (1844), Halfweg (1852) and Gouda (1856).

In 1865 the reclamation of the IJ and the construction of the North Sea Canal began . The reclamation was completed in 1872 and the North Sea Canal was opened in 1876. The pumping stations Spaarndam and Halfweg now discharged the storage water via side channels C and F to the North Sea Canal. The history of the Halfweg steam pumping station is inextricably linked to that of the Haarlemmermeer . The Management and Supervision Committee for the Drainage of the Haarlemmermeer was closely involved in its creation and the need was recognized so early that it was already on the drawing board in 1847, the year in which the Cruquius and the Lynden were built. However, due to a lack of government funding, this was not realized until 1852

To increase the capacity of the pumping station, the steam engine was replaced in 1888 by two machines of 150 hp each. A separate boiler house was also built, with four Lancashire boilers. Due to the steam pipe, the bridge between the quay and the machine building was covered. The paddle wheels were also enlarged to 7.5 meters in diameter. The last enlargement took place in 1923. The steam engines were replaced by one 500 hp steam engine and water-tube boilers were installed in the boiler house. With the new machine, the paddle wheels moved 1500 m³ / minute. From the installation of 1888, only the gears and pinions with V-teeth remained in use. The steam pumping station functioned like this until 1977.