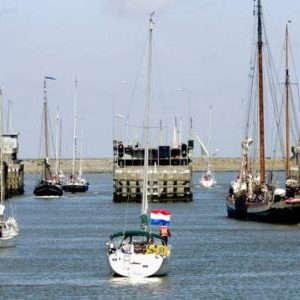 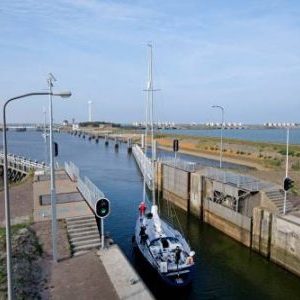 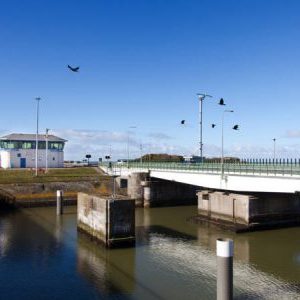 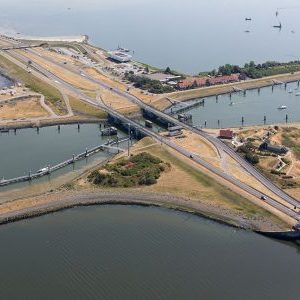 The Afsluitdijk has two lock complexes, the Stevin and Lorentz locks, each consisting of a sluice for the management of the water management in the IJsselmeer and lock locks for shipping. The complexes were opened in 1931 and 1932, when the dike was completed. The locks look the same at first sight, but differ from each other on a number of points.

The Stevinsluizen are located near Den Oever in the province of North Holland. The lock has a length of 120 meters and a width of 14 meters and is suitable for ships with a draft of up to 3.50 meters. The A7 motorway crosses the locks by means of two swing bridges. The discharge sluices on the east side of the lock consist of three groups of five discharge chambers. The lock complex is named after Hendrik Stevin, an engineer employed by the Dutch army who announced the first plans to close off the Zuiderzee in 1667.

The Lorentz locks are located near Kornwerderzand in the province of Friesland. There are two locks available; a large lock with a length of 120 meters and a width of 13 meters and a small lock with a length of 67 meters and a width of 8.20 meters. Both locks are suitable for ships with a draft of up to 3.50 meters. Here too, the A7 crosses the locks with two swing bridges. The discharge sluices on the west side of the lock consist of two groups of five discharge chambers. This complex is named after Hendrik Lorentz, a physicist who studied the influences of magnetism on radiation waves. Lorentz was also involved in the plans for the reclamation of the Zuiderzee in 1920. He calculated the forces of the water currents that would arise during heavy storms by closing off the sea by a dike.Afsluitdijk lands near the Frisian town of Piaam, but Lorentz’s calculations showed that a more northerly landfall was better and Zurich eventually became the place where the dike would land on the mainland.