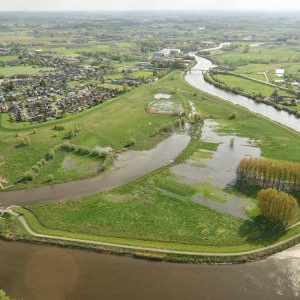 The aim of the Sigma Plan is to better protect Flanders against flooding of the Scheldt and its tributaries, while at the same time boosting the valuable nature of the Scheldt. The Sigma Plan covers safety, nature, recreation and economy. In extreme weather conditions, the Scheldt and its tributaries can reach dangerously high water levels and even flood. The Sigma Plan invests in stronger and higher dikes and a chain of natural inundation areas in the river valleys, which can collect excess river water in a controlled manner. This gives the rivers space to flow and to overflow. The reason for the Sigma Planwas the flood of 1976. To prevent such a disaster in the future, the federal government launched an ambitious plan, with the S van Scheldt and by analogy with the Dutch Delta Plan . In 2005 the Sigma Plan was adapted to new scientific insights. Since then, the Sigma Plan has also made an important contribution to the European nature objectives for Flanders. The implementers of the Sigma Plan are the Vlaamse Waterweg nv and Natuur en Bos of the Flemish government. In addition to water safety, the plan also focuses on the development of river nature, recreation and the local economy.