ROOM FOR THE RIVER 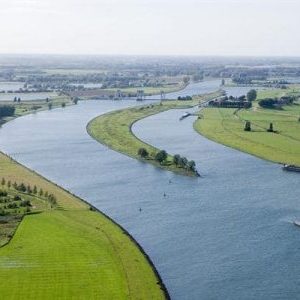 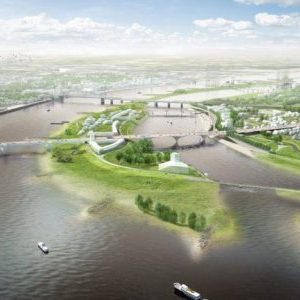 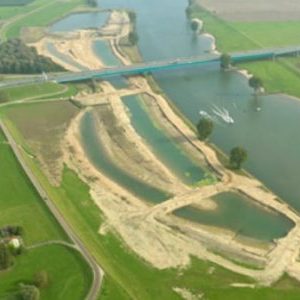 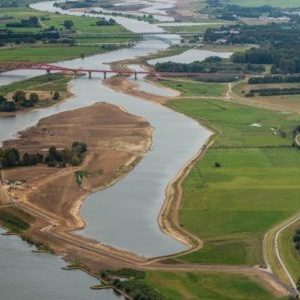 The rivers distribute the water over the low-lying areas of the Netherlands and partly transport it to the North Sea and the IJsselmeer . The IJssel , the Waal , the Nederrijn and the Lek (Rhine Branches) are fed with rain and melt water from the Rhine from the Swiss Alps. The maas flows into our country via France and Belgium and is a rain river. Today, due to climate change, there are more frequent periods of more rain and melt water, causing water levels in the rivers to rise. Since the high water in the 1990s, this has been handled differently; not only are dikes being strengthened and raised, but the rivers are given space again. This approach is clearly visible in the Room for the River and Maaswerken programs.

In 1993 and especially in 1995 , large amounts of rain and melt water caused very high water levels in the Dutch rivers. The dikes were not strong enough in many places, so there was a risk that they would collapse. In 1993 about 8% (18,000 hectares) of the province of Limburg was under water. The undiked villages of Borgharen and Itteren were also flooded. About 12,000 people had to be evacuated. In 1995 these villages were again badly hit. As a precautionary measure, 250,000 people and 1 million animals were evacuated in the Gelderland river area.

In the years that followed, the dikes in the river area were reinforced at an accelerated rate and new dikes were also built along the Maas at certain locations (Delta Plan Major Rivers). The Rhine Branches and the Maasneeded to be able to discharge larger quantities of water. This tightening of the safety level marked the new approach to high water in our rivers: they are given more space. Due to the extremely high water levels in the 1990s, ‘Room for the River’ became the new starting point for the flood protection approach in our river area in 2000. This was not only applied in the Room for the River and Maas Works programs, but also in current and future plans river widening, in addition to dyke improvement, is the starting point. This allows us to store and discharge more river water and to adapt to the consequences of climate change.

The Room for the River program was officially completed with the opening of the Reevediep flood channel at the beginning of 2019. Since 2006, the central government and the region, in close consultation with residents, have taken measures at 34 locations along the IJssel , the Waal , the Nederrijn and the Lek to improve safety, spatial quality and quality of life for approximately 4 million Dutch people.

The river widening from the Meuse Works program started in 2005. A large part of the costs is and will be collected through sand and gravel extraction (private parties such as land owners). In 2015, the river widening target for the center and north of Limburg (Zandmaas) was achieved, but work on the dikes is still continuing there. In 2017 the target for the south (Grensmaas) was achieved. A secondary channel will be constructed near the Maasband, where gravel extraction in the Grensmaas will continue until 2027.

We know different ways to give rivers more space. For example, by moving dikes inland to widen the river, but also digging secondary channels and lowering flood plains will increase water discharge. Every river requires customization. The photo below shows all the methods that have been used within Room for the River and Maaswerken and that are still being applied.

Room for the river – the how and why!

Room for the river works! – The deliberately flooded Noordwaard polder at a high river level