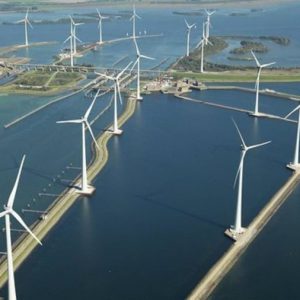 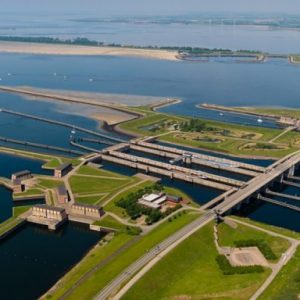 Although the Oosterscheldekering has an open character, it could not be prevented that the mouth of the Oosterschelde was reduced in size, so that less seawater could flow in and out of the Oosterschelde . The difference between high tide and low tide thus became smaller. To prevent mud flats and salt marshes from being endangered, two dams were constructed in the eastern part of the Oosterschelde : the Philipsdam and the Oesterdam . These dams made the surface of the Oosterscheldereduced and promoted tidal action in the remaining area. In addition to salt marshes and mud flats, these dams also meant the rescue for oyster farming in Yerseke, which is largely dependent on the tidal movement. There was also a tidal-free water behind the dams that was part of the Scheldt-Rhine connection and the two dams, together with the Eastern Scheldt barrier, protected the area behind against high water levels. The so-called compartmentalization works also included the Markiezaatskade , the Bathse Spuikanaal and the Bathse Spuisluis .

The Philipsdam can be divided into two parts: the northern part that runs from the lock complex on the Plaat van Vliet (which is located in the Volkerak) to the connection to the Grevelingendam and the southern part that runs from the lock complex towards Sint Philipsland. The dam has been placed as far back as possible in the Eastern Scheldt , so that the salt marshes of Sint Philipsland would not end up behind the dam. The sweet, stagnant water would mean the end of the salt marshes. The construction of the Philipsdam was made easier by temporarily closing the Oosterscheldekering . This method was also used in the construction of the Oesterdam .

In 977 and 1978, a 96 hectare work island was created on the Plaat van Vliet, with a 19 hectare building pit. In order to be able to make this building pit, 100 hectares were excavated and 130 hectares supplemented. In total, approximately 370,000 m2 of concrete was poured, containing 27,000 tons of reinforcing steel. The locks were completed in mid-1984, the closed part of the dam only in 1987. In the meantime, a large amount of sand was sprayed on the route between Sint Philipsland and the Grevelingendam.