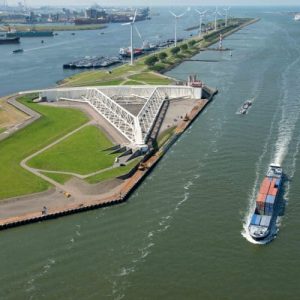 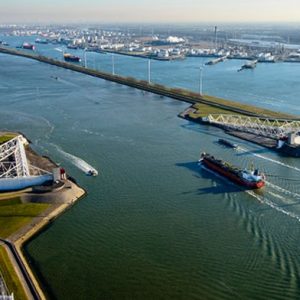 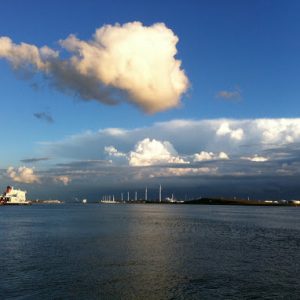 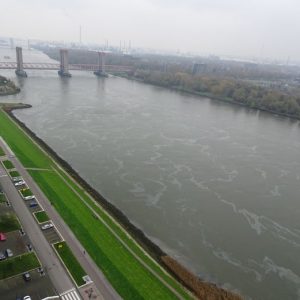 In the 19th century, the port city of Rotterdam became increasingly difficult for modern large ships to reach, which threatened the transit to Germany and England. As a solution, the government decided to dig a New Waterway between Rotterdam and Hoek van Holland. The access roads have always been of vital importance to the port of Rotterdam . In the mid-18th century, the Brielse Gat and the Botlek formed this connection, later the Goereese Gat and the Haringvliet and then the Volkerak and the Brouwershavense Gat. In 1830, King William I ordered the Canal through Voorne between Hellevoetsluis and the Haringvlietto dig. The estuary of the Maas at the Goereese Gat was silted up and the estuary of the Brielse Maas was not deep enough for the large sea-going vessels that wanted to visit the port of Rotterdam . The construction by Voorne-Putten significantly shortened the connection between Rotterdam and the North Sea . In the 19th century, Rotterdam became an important transit port for the Rhine area, which in those years underwent a major expansion due to industrialization. Hydraulic engineer Pieter Caland was commissioned in 1863 to cross the Hoek van Holland, as it was called at the time, and to extend the Rhine estuary in a straight line to the sea. He argued that Rotterdamwas best helped by the shortest possible connection between the port city and the North Sea . After the necessary expropriations, the first sod was finally symbolically driven into the ground by Prince William of Orange-Nassau on October 31, 1866.

The Nieuwe Waterweg soon showed some shortcomings. The draft of the canal appeared to be a problem in particular, so that dredging became necessary. Pieter Caland proposed to build two dams up to two kilometers in the sea. These dams had to break the sea currents so that less silt would enter the navigation channel. The Nieuwe Waterweg was opened in 1872. Since then, the navigation channel has been dredged regularly, so that the ports near Rotterdam also remain accessible for large sea-going vessels. The eastern boundary of the Nieuwe Waterweg is marked by the Maeslantkering . This last part of the Delta Works was completed in 1997. In the 19th and 20th centuries, Rotterdam expandedespecially in the areas along the Nieuwe Maas and the Nieuwe Waterweg, urban expansions that were necessary to accommodate industrial expansion and the constantly increasing port activities and the associated growing demand for housing. Kralingen, Katendrecht and Charlois were annexed in 1895. Hoek van Holland, located at the mouth of the Nieuwe Waterweg, was also added to Rotterdam in 1914 . Hoek van Holland, best known as the place of arrival and departure of the ferries that sail to Harwich in England, owes its existence to the construction of the Nieuwe Waterweg. In many places, the port installations and industry eclipsed the rural character. This happened in Pernis, among others, in 1934 in Rotterdamwas added. In that year, parts of Rhoon and Poortugaal and the entire municipality of Hoogvliet were also annexed by Rotterdam . Earlier, in 1928, Crooswijk had already been added to Rotterdam .