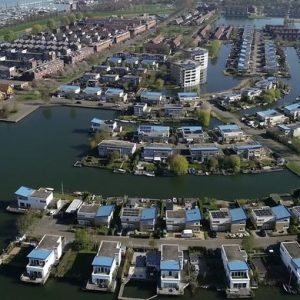 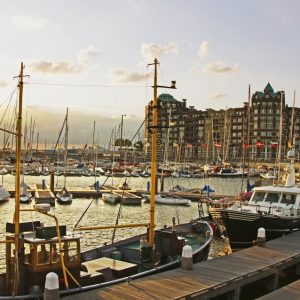 Lelystad is the capital of the province of Flevoland. The municipality of Lelystad is located in Eastern Flevoland and has an area of 765 km², including a water surface of 531 km². Lelystad was intended as the capital of the IJsselmeerpolders, which is why the city was named after the father of the Zuiderzee project , Cornelis Lely. He was a Dutch engineer, hydraulic engineer, minister, governor and politician who in 1891 designed a plan for closing off the Zuiderzee. In 1932 the Zuiderzee was finally closed off definitively by the Afsluitdijk and the IJsselmeer was created . The construction of Lelystad actually started before Eastern Flevoland was drained. In 1950, Parceel P was constructed, a work island in the middle of the IJsselmeer . The workers who lived on this work island had to build a construction pit for the Wortman pumping station, which was used to reclaim Eastern Flevoland . Lot P is the oldest part of Lelystad and is now called Lelystad Haven. Construction of the rest of Lelystad started in 1965. The first residents arrived in September 1967. However, the development of Lelystad got off to a slow start, mainly because the connections with the old land were poor for years. Another problem was the decision-making about the Markerwaardwas difficult. The intention was that this polder would become the hinterland of Lelystad. In the mid-1990s, appealing architects were recruited to give the city its own identity and more self-confidence, old districts were restructured and the city center was overhauled. The coastal strip also received a boost with high-quality housing and new recreational facilities.