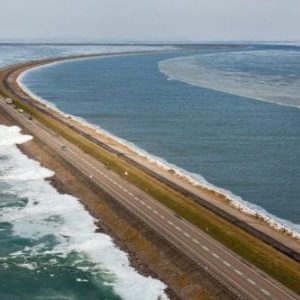 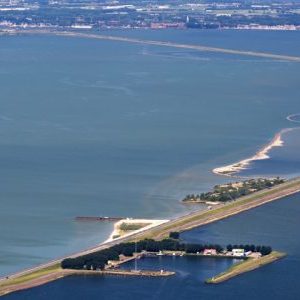 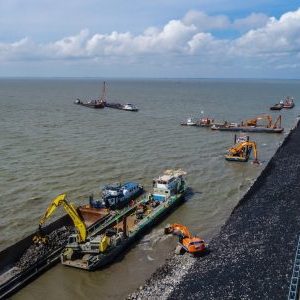 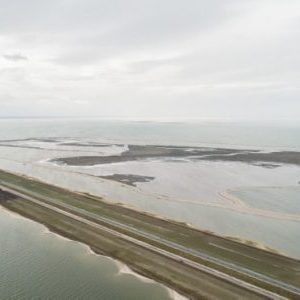 The Houtribdijk was originally constructed with the aim of reclaiming the Markermeer , the so-called Markerwaard. The construction of the dike began in 1956. In 1958 there were doubts about the continuation of the project, because it was considered too expensive to construct the entire dike. In the 1950s, priority was given to the reclamation of the Markerwaard in relation to southern Flevoland , on the grounds that the Lelystad-Enkhuizen dike offered better protection in the event of the Afsluitdijk breaching. The dike has been tendered out and constructed in phases. In 1959, 4 kilometers of dike was completed. Due to a lack of money, tenders to construct parts of the dike were postponed several times. The dike was built both from Lelystad and fromEnkhuizen , and in 1973 there was still 7 kilometers missing halfway.

The Houtrib locks near Lelystad were opened on 28 July 1975 and the last hole in the dike was closed on 4 September 1975. Then the road was built over the dike, a cycle path was built and a bus connection across the dike was put into use. A traffic volume of 5,000 vehicles per day was expected shortly after opening. Originally it was intended to impolder the resulting Markermeer to the Markerwaard, where the Houtribdijk would form the northern boundary. These earlier plans meant that the Houtribdijk is called a dike, when in fact it is a dam. The same applies to the Afsluitdijk . In 2003, plans were made for the Markermeerto be reclaimed permanently. Shipping has three options for passing the Houtribdijk, via the Krabbersgat naviduct, which was opened in 2003, via the Krabbersgatsluizen at Enkhuizen and via the Houtribsluizen at Lelystad.

Between 2017 and 2020, the Houtribdijk was widened and strengthened as part of the flood protection program-2 (HWBP-2). During the dyke improvement, the northern 10 kilometers of the Houtrib dyke between the naviduct and Trintelhaven was provided on both sides with a 100-meter-wide sand package. However, in strong winds, large amounts of sand appeared to be blown over the road, making it impassable at times. In August 2019, more than 5,000 cubic meters of sand was blown onto the road. The grass mixture that had been sown was blown away or buried under the sand. Other measures to combat the sand drift turned out to be ineffective, so an extra layer of soil of 900,000 m² was added, first on the side of the IJsselmeer and then on the side of the Markermeer .