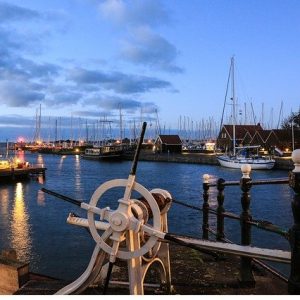 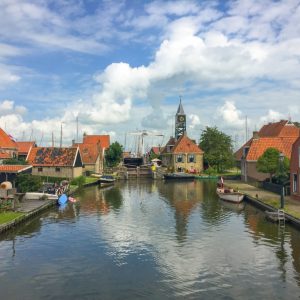 The place where Hindeloopen is located was already inhabited in the 8th century and suffered a lot from the Normans. Around 825, the name ‘Hindolop’ was used for this settlement in a charter. In the 12th century there was already a chapel in Hindeloopen and in the 14th century a church. The city charter dates from the 13th century. Because the city rights in Friesland were not granted by a count, but were gradually created or adopted, no exact date is known on which Hindeloopen became city. It is believed that the oldest city charter dates from the 13th century. We have to look for the oldest core on the Buren, close to the seawall. The first extension was to the Gardens, where previously there were vegetable gardens. Oude Weide (1614), Nieuwstad (started 1614) and Nieuwe Weide (started 1638) followed in the 17th century. These streets were built on the communal pasture area, the Meenschar. Hindeloopen already had many trade relations with Lubeck and other Hanseatic cities in the Middle Ages, but did not become a Hanseatic city itself. Also the timber shipping to Norway and the many contacts withAmsterdam were important for Hindeloopen’s heyday, which lasted until the end of the 17th century. After this, trade and shipping declined, the population decreased sharply and the church was even reduced during a renovation. At the end of the 19th century it seemed that better times were coming, because the fishing industry on the Frisian west coast grew explosively. After the construction of the Afsluitdijk in 1932, the size of the fishing fleet gradually decreased more and more, partly due to the government’s remediation policy. In 1970, the new Hindeloopen marina was built next to the old harbor. Today – especially in the summer season – many ships are moored in both ports; recreational boats and restored old ships with a recreational function.