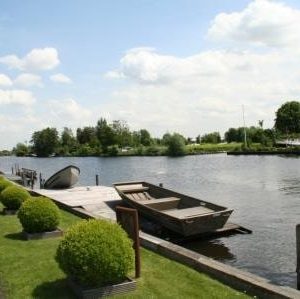 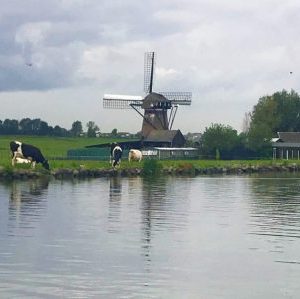 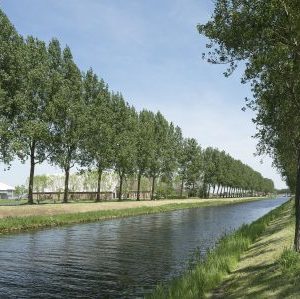 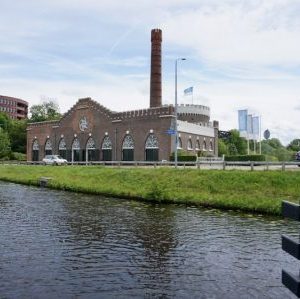 The demand for peat from Leiden, Haarlem and Amsterdam was so great and the yields from the lands were so small that the residents around the Haarlemmermeer and the numerous other lakes to the south and east of it could not resist the temptation to paint their lands. The dredged peatlands filled with water and thus became an easy prey for the ‘water wolf’, as the Haarlemmermeer used to be called. With this, the owners of the land around the banks have also contributed to the unbridled expansion of the lakes. Around 1700, the Haarlemmermeer, which was on average two to four meters deep, had a surface area of 16,000 hectares and a century later approximately 18,000 hectares. During heavy storms in 1834 and 1836, the water was whipped up to such an extent that the polders in the surrounding area were flooded up to the municipal boundaries of Leiden and Amsterdam . Action was necessary, especially because there was a chance that in a new storm the Braassemermeer, the Westeinderplassen and the Legmeer would be swallowed up by the Haarlemmermeer, which would cause major problems. In 1839 the Haarlemmermeer Reclamation Act was passed, amid great protest from barge skippers and fishermen, among others, who felt threatened in their existence. Amsterdam feared a silting up of the IJ, Leiden and Haarlem were afraid of serious pollution of the city canals because they could no longer be flushed and the Rijnland water board saw its drainage capacity reduced from 22,000 to 4,000 hectares.

In May 1840, work began on digging a 60-kilometer ring canal and building a ring dyke. In 1845 this work was completed and the Leeghwater steam pumping station on the Kaag could start discharging on a canal specially dug for this purpose that drained into the sea at Katwijk. In 1848 and 1849, the Lijnden and Cruquius steam pumping stations were put into use and in 1852 some 800 million m3 of water had been pumped away. To compensate for the loss of storage capacity, three large steam pumping stations were built at Halfweg , Spaarndam and Gouda , at the expense of the government , with sufficient capacity to protect the inhabitants of the Rijnland water board from flooding.

In the 80s and 90s of the 19th century, the mostly agricultural population of the polder was in great poverty as a result of the sharply falling grain prices due to the import of cheap grain from America, Russia and South America. Many farmers moved to the cities or emigrated to the United States. After the turn of the century this improved through better agricultural techniques, mechanization of agriculture and the connection of Hoofddorp in 1912 to the railway network of the Hollandsche Electric Spoorweg Maatschappij. Due to the rapid rise of car and especially bus traffic, the company had to discontinue several lines. In 1935 a passenger train of the HESM ran for the last time through the polder, after which the polder had to do without a train connection for almost half a century, until the first part of the Schiphol line (Amsterdam- South – Schiphol) was put into use.

Today, the municipality of Haarlemmermeer has more than 140,000 inhabitants and much of its rural character has been lost, mainly due to the unstoppable development of Schiphol Airport. In 1917, by order of the Ministry of War, a military air camp was set up at Fort Schiphol, on a meadow in the corner between Spaarnwouderweg (now Schipholweg) and Schinkeldijk (now Schipholdijk). A year after the end of the First World War, the Koninklijke Luchtvaart Maatschappij was granted permission to use the airport for civil aviation. In 1938, the airport, then approximately 210 hectares in size, got paved runways. Currently, the airport covers 1,700 hectares, about 10% of the municipality of Haarlemmermeer, and Schiphol processes about 43 million passengers per year.

The Haarlemmermeer from above