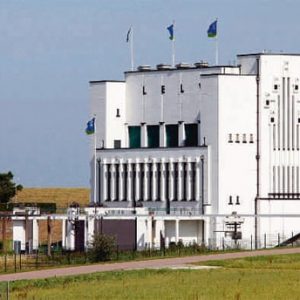 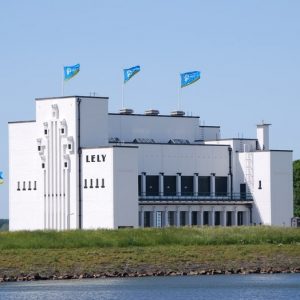 Lely pumping station, an electrically powered pumping station, keeps the Wieringermeer dry. The building, a national monument of special architectural value, was put into use in 1930. The pumping station is named after Cornelis Lely, initiator of the implementation of the Zuiderzee works , and is located just north of Medemblik. At the insistence of S. de Clerq, chairman of the Association of Dutch Architects, the Hague architect D. Roosenburg was commissioned in 1928 to construct a special and appealing building for an electrically powered pumping station. De Clercq noted that the Netherlands had lagged behind in the design of major works compared to other countries and made a passionate plea for an appealing design of the major works of art in the Zuiderzee project .