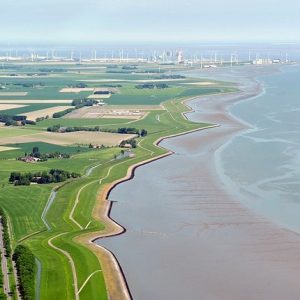 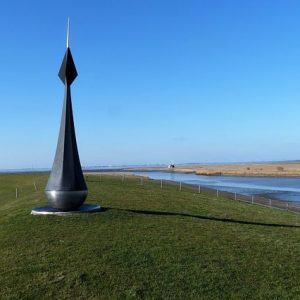 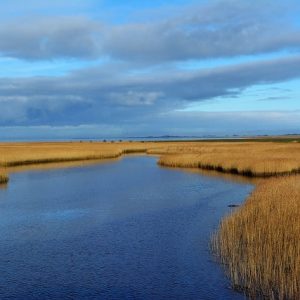 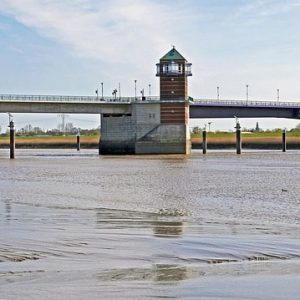 The Dollard was created in the late Middle Ages by multiple floods and storm surges that largely cleared the original peat landscape. Large parts of the old districts of Reiderland and Oldambt were lost. It was once thought that the Dollard was flooded in the year 1277 or during the Marcellus flood of the year 1362, which caused a lot of damage in Northern Germany. However, almost nothing can be found about this in historical sources. Because the peat surface suffered from erosion, weathering and subsidence (sediment), the area had probably been faced with flooding for centuries. Archaeological finds show that a freshwater environment could still be found at Bad Nieuweschans, Vriescheloo and Scheemda in the fifteenth century. The surroundings of Pogum already had a salt-loving vegetation in the thirteenth century. The area was intersected by two rivers, the Reider Ae and the Munter Ae, which flow into the Ems via separate lock complexes. The Groningen chronicler Johan Lemego wrote that the locks of Reide were destroyed during a civil war. He suggested that this happened in 1413, but other records indicate that these events must have happened a little earlier, possibly during the Cecilia Flood of November 21, 1412. Six years later the sea would have reached the village of Blijham, after which there was a kind of inland sea. arose that filled and emptied twice a day. The water forced its way through the remaining peat. In the first half of the fifteenth century, the eastern Dollard Boezem was created and in 1454 the inhabitants of the area built an emergency dike from the Punt van Reide to Finsterwolde. This dike ran from the solid bank of the Ems in a large arc through the then low moor area to the higher sandy soils. The dyke already broke around 1466, but the remains would still have been visible in the 16th century. The western Dollard basin probably originated in the years after 1470. Large parts of the area were affected by the sea only after theCosmas and Damian floods had pushed seawater deep inland in 1509. The arm of the sea reached its largest surface around 1520.