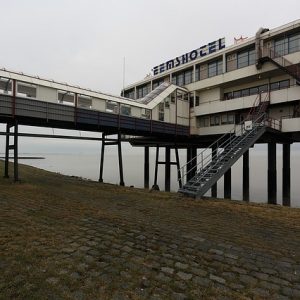 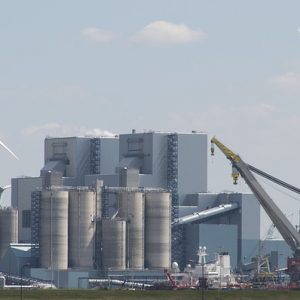 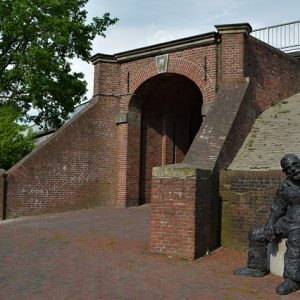 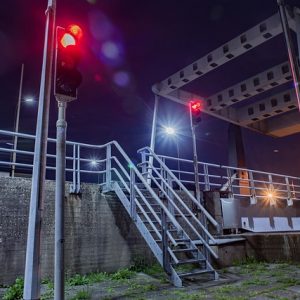 Delfzijl originated at the mouth of the Damsterdiep, a dug waterway that used to be called the Delf. Since the end of the 12th century, three zijlen (drainage sluices) have been situated at the place where the Delf flowed into the Ems. The oldest mention of the place dates from 1303. Appingedam, located a few kilometers upstream, was an important link in the trade with East Friesland in the 13th century and had turned to the central market for the products from Fivelingo and other parts of the east of Groningen. Buildings also developed at the Eemsmond and formed the basis for the creation of Delfzijl, a city that only received city rights in 1825. Over the centuries, Delfzijl developed into an important port city for the north and the importance of Appingedam outflanked.

By opening or closing the locks in the Damsterdiep, the water level in the hinterland can be regulated and, if desired, flooded. The locks also offer the possibility to regulate shipping from the hinterland to the Ems. Various fortifications have been regularly constructed near these locks. In the 15th and first part of the 16th century with log houses, in later centuries with fortifications. Around 1400 there was already talk of a primitive port company at Delfzijl for the transhipment of sea-going vessels to smaller inland vessels. The port of Delfzijl is mentioned in various maritime writings from the 16th century. At that time, the port was an important alternative port for the Netherlands, when the ports of Holland and Zeeland were unsafe due to war conditions. In 1591, Prince Maurits visited the harbor with a fleet of 150 ships. A few decades later, Piet Hein visited Delfzijl with the Silver Fleet. During the second Anglo-Dutch war in 1665, Michiel de Ruyter entered the port of Delfzijl with the West Indies fleet and thirty ships captured by him. In 1705, the Greenland fleet with 96 ships and a loot of 1,100 whales moved to Delfzijl for fear of a French war fleet.

In the French period, a French garrison was established in Delfzijl, in 1799 a barracks was built there. Until the exile of Napoleon to Elba, the place remained occupied by a French troop unit: 1,400 French soldiers were stationed in 1813. In 1814 Cossacks, Prussia and the Dutch land storm struck the siege around Delfzijl. However, the besiegers suffered great losses. Only after the French commander received an official letter in 1814 that his emperor had surrendered did he hand over power. The French sorties caused heavy destruction to the places in the area around Delfzijl and Delfzijl itself was also seriously damaged. During World War II, the city’s surroundings were heavily fortified with bunkers, trenches and other military assets. At the end of the war, the port of Delfzijl was used to unload the so-called Swedish white bread. Due to the many reinforcements, the German occupation ended later than in most places in the Netherlands. A fierce battle was fought for Delfzijl. The city was of strategic importance for the protection of the Ems and the German city of Emden. On May 2, 1945, the German garrison capitulated. The inner city of Delfzijl was largely destroyed during the liberation of the war.

After the war, the city center was rebuilt and new expansions were realized. However, the real development of the city only started afterwards. Salt was found in the soil of the province of Groningen in 1951 and natural gas in 1958, and the Eemsmond region was designated by the Dutch government as an area for economic development and opening up the northern Netherlands. In 1968 the construction of a deep-sea port was started, followed by the construction of the industrial estate Oosterhorn and the Zeehavenkanaal. The port of Delfzijl was completed in 1973. The economy had meanwhile landed in the oil crisis, partly as a result of which industrial expansion slowed down sharply. The central government also stopped providing subsidies for the establishment of new companies. As a result, an important part of the intended industrial area Oosterhorn near Delfzijl remained undeveloped. To this day, Delfzijl has to deal with depopulation and an aging population. Despite the demolition of many houses and buildings, many young people are still leaving. Delfzijl is the sixth largest port in the Netherlands. Shipyards in the city are Nautisch Centrum Delfzijl and Niestern Sander. Chemiepark Delfzijl is the second largest chemical industrial area in the Netherlands in terms of size. Factories were or are Aluminum Delfzijl (ALDEL), Akzo, NKF and Dow Chemical, among others. In 2006 the first biomethanol plant in the world was opened in Delfzijl.