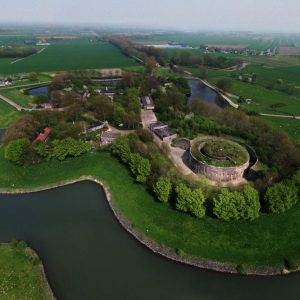 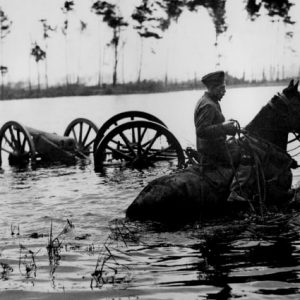 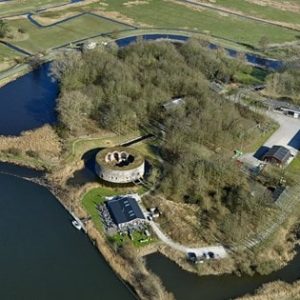 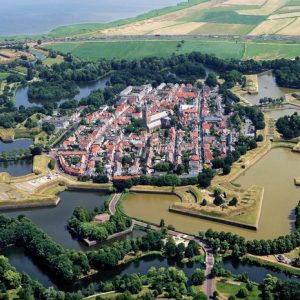 The large number of water lines is typical of ‘Nederland waterland’. Over the centuries, no fewer than ten of the lines in the Netherlands used flooding as a special obstacle. For example, we know the Frisian Water Line, which dates back to the Eighty Years’ War and which was deployed in the disaster year 1672, when the Netherlands was attacked from various sides, by England, France and the dioceses of Münster and Cologne. The Dutch Waterline, both the Old and the New, formed the backbone of our defense for centuries from 1672 onwards. The Zuiderwaterlinie stretched out in the west and north of Brabant as part of the Southern Frontier and was established in the course of the 18th century by linking the separate older lines and fortified towns. The IJssel Line (late 17th century to 1968) was our easternmost waterline and had to absorb and delay a first enemy attack. In 1952, this line was given an important role by NATO in the days of the Cold War. The Grebbelinie (1745-1951) also functioned for centuries as a delay buffer for the Dutch Waterline. In the May days of 1940, the battle was hardGrebbe Line the main line of defense. The Defense Line of Amsterdam, a protective ring around the capital, was built from 1880 onwards. The modern concrete fortresses with flood plains ensured the capital as a reduit, the last place of resistance in the country. Another water line was the 1629 water line of the Spanish occupiers who fought for Den Bosch. In 1629 Den Bosch was conquered by Frederik Hendrik. To take the city, he built a more than forty kilometers long line of attack around the city; a series of dikes and canals, which were protected by dozens of lookouts, redoubts and redoubts. Much of that line is still present in the landscape around the city, sometimes visible as small differences in height and subtle lines, sometimes clearly in the form of old dikes and remnants of fortifications. The Stelling van Gouda from 1922 remained a concept. And then there were two water lines of the German occupier from 1944/1945: the Vordere- and Hintere Wasserstellung.

In 1351 Naarden-Vesting was granted city rights, making it the only city in Het Gooi to this day. In the 16th century, Naarden became a military fortress because of its strategic location and part of the Old Dutch Waterline. In the 17th century it got its characteristic and well-preserved star-shaped plan with double walls, gatehouses and bastions.

A beautiful drone image from 2016 of the fortified town of Hulst, part of the Spanish line (Old Dutch Water Line) in Zeeuws-Vlaanderen.