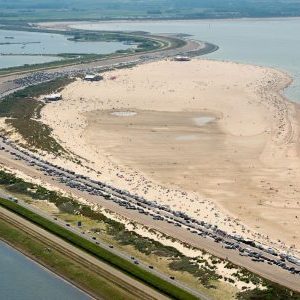 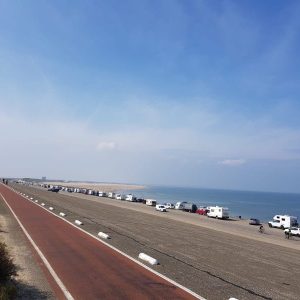 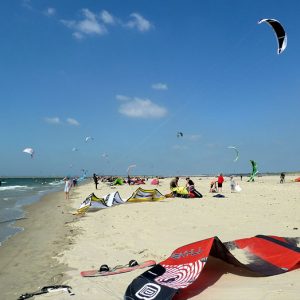 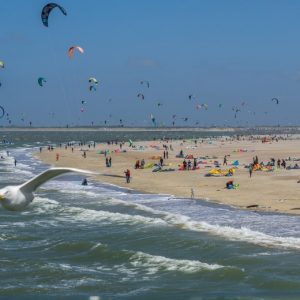 The seventh building of the Delta Works is the Brouwersdam. This dam, located in the provinces of South Holland and Zeeland, closes off the Brouwershavense Gat. This closure created the Grevelingenmeer . In 1965 the Grevelingendam between Goeree-Overflakkee and Schouwen-Duiveland was completed. The Grevelingen south of Goeree-Overflakkee were still connected to the North Sea, which meant that the storm tides could increase here. In 1965, therefore, the dikes on the south side of the island were raised. Immediately after the closure of the GrevelingendamConstruction of the Brouwersdam was started to shorten the period of higher tides. After more than six years, in the spring of 1971, the Brouwersdam was closed. Some very high water levels occurred between 1964 and 1971, in November 1966 the water here remained just a few centimeters below the level during the flood disaster of February 1, 1953 .

Construction of the six-kilometer-long dam started in 1962. The estuary between Goeree and Schouwen here was up to 30 meters deep. Caissons with holes were lowered, which allowed the tides to continue during the construction of the dam and prevented too strong a current in the shrinking hole. This method was used for the northern closing hole De Kous in the Springersdiep. A cable car was used for the southern closing hole, the Brouwershavense Gat, because of the great depth and the hard-flowing water next to the caissons. From this cable car large blocks of concrete were poured into the channel, over which sand was then sprayed. After all caissons had been lowered, the gaps were closed with sliders. After the closure of the Grevelingenabout 3,000 hectares of land fell dry. The road on the dam was put into use on March 30, 1973. Later, in 1978, another passage lock was installed in the dam, the Brouwers lock.

Halfway the dam is the bungalow park Port Zélande and a marina. A lot of kite surfing is done on the sea side of the dam and both the sea side and the side of the Grevelingenmeer attract many windsurfers. The museum tram line of the former RTM Foundation is located on the Brouwersdam from the Punt van Goeree to Middelplaat Haven. Since 2006 the pop festival Concert at Sea has been held annually on the Brouwersdam. In 2018, it was decided to improve the water quality by placing closable tunnel pipes at various places under the dam through which oxygen-rich water can flow into the Grevelingenmeer . The tidal range will be approximately 40 centimeters, around a middle level of 30 centimeters below sea level.

One of the largest open air music festivals in the Netherlands, Concert at Sea, takes place annually on the Brouwersdam.