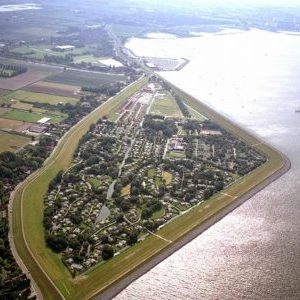 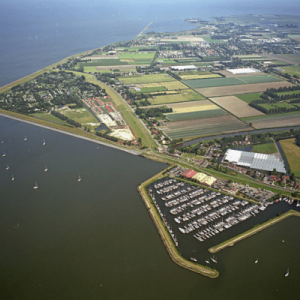 In 1918 Cornelis Lely’s Zuiderzee Act was passed by the Lower House. According to this law, the Zuiderzee would be closed off by the Afsluitdijk and the IJsselmeer that was created as a result would be partly impoldered. The main objectives of the Zuiderzee project were to protect the Dutch coasts against flooding and to reclaim land for agriculture. In 1924 the Lovink Committee published a report proposing the construction of a trial polder. In this polder, practical experiences could be gained on a small scale with the cultivation of the land in the newly constructed Wieringermeer . These soils have a high salinity because they had been under seawater for centuries.

In 1926-1927, a 40-hectare trial polder was constructed near the village of Andijk. The Board of Directors of the Wieringermeerwanted to see how the soil in a reclaimed polder developed, and how the saline soils could be cultivated. After the drying-up, a farm and laboratories were built for agricultural, soil and microbiological research. Various aspects important for optimal use of the soil were studied, such as desalination, settling and drying, and tests were carried out for the best way of tillage and the choice of suitable crops. In 1929, the soil structure of the trial polder had already been improved to such an extent that almost the entire polder could be cultivated. The experience gained in the test polder is the development of the Wieringermeeraccelerated. The dry land has become more suitable for agriculture, which has increased its sales value. The proceeds from the sale of the land made up for the costs of constructing the polders.