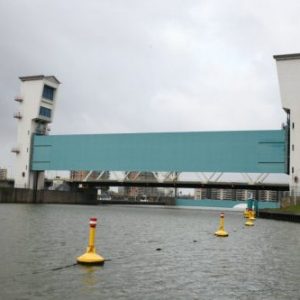 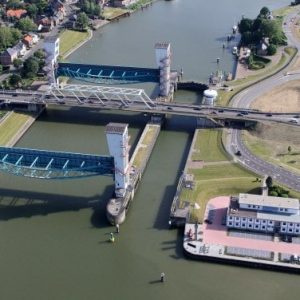 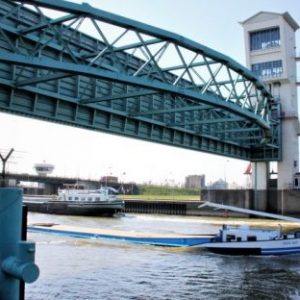 The first structure of the Delta Works , the Algerakering (also known as the Hollandse IJssel storm surge barrier) is a storm surge barrier in the Hollandse IJssel. The storm surge barrier is located near Rotterdam, Capelle aan den IJssel and Krimpen aan den IJssel, and protects a large area behind it. Two slides measuring more than eighty meters wide and 11.5 meters high are each suspended between two towers with a height of 45 meters on steel cables. The N210, the connection between the Krimpenerwaard and the mainland of South Holland, runs over the barrier. Normally, the ships pass under the gates, only in an emergency they are lowered and the river is completely closed off. Ships can still pass through the adjacent Algera lock. Because the Hollandse IJssel is an important shipping route, it could not be closed with a dam. A cut-off would make the drinking water supply in a large part of South Holland more secure, due to less inflow of salt water into the polders. A storm surge barrier with two movable gates that hang between concrete towers was chosen. Immediately after the flood disaster of 1953, the Dutch government decided to build a storm surge barrier in the Hollandse IJssel on the advice of the Delta Committee. A dike breach of the Schielandse Hoge Zeedijk was barely prevented during the night of the disaster. On February 1, 1953, the high water made a hole in the Groenendijk near Hitland.Sandbags no longer helped and the whole of South Holland up to Leiden was in danger of flooding. A nearby ship was requisitioned by the mayor of Nieuwerkerk and the owner sailed his ship like a lock gate in the hole in the dike. Sandbags and tarpaulins were used to stop further incoming water. A few weeks later the ship was lifted out of the dike by a floating trestle. Only a statue reminds of the fact that South Holland was also on the verge of a catastrophe.